Check out the Press that Mountain Trek has been receiving in Magazines, Websites and in the News.

One of the most well-read business magazines in America has just listed Mountain Trek as #1 on its "Luxury Wellness Holiday Gift Guide 2015." Forbes, which is famous for its rankings including the Forbes 400 that lists the wealthiest people in America, recently shared 14 gift ideas in an article by Ann Abel that ranged from health and fitness retreats, such as Mountain Trek, to a high-end gym bag and the DreamWave massage chair. In the article Ann suggests Mountain Trek is an excellent gift "For Him" because "the regimen, while challenging, is mountain-man outdoorsy: long hikes through the Canadian Rockies in which you’re expected to be breathing too hard to carry on a conversation. The take-home advice, about everything from sleep to stress, is solid, not woo-woo. No wonder so many of the 16 guests each week are men." 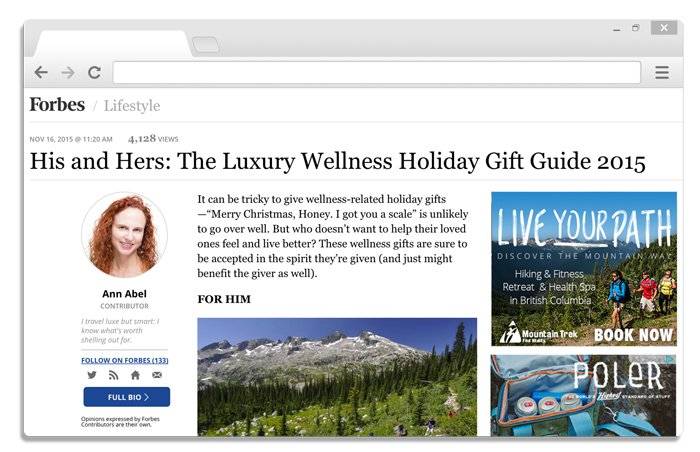 Mountain Trek has good company in the piece as SHA Wellness Clinic in Spain and Mountaintop Reboot in Aspen are also listed. But unlike the other spas and resorts, Mountain Trek's program guarantees fat loss while also targeting sleep habits, improved fitness levels, stress reduction and detoxification. Ann goes on to say in the article, "who doesn’t want to help their loved ones feel and live better? These wellness gifts are sure to be accepted in the spirit they’re given (and just might benefit the giver as well)." We couldn't agree more. The best gift you can give a loved one is improved health and wellness. If you've noticed that your mother or father are working too hard lately, or your wife or husband can't sleep, or you've just found out your 40-year-old son or daughter is at risk for developing Type 2 diabetes, then give them the gift that will always give back: their health. Book Mountain Trek for you or a loved one for a holiday gift this year and enjoy the amenities that only our all-inclusive resort can offer:

To see Ann's story in its entirety, log on to the Forbes website and read, "His and Hers: The Luxury Wellness Holiday Gift Guide 2015." [fbcomments] 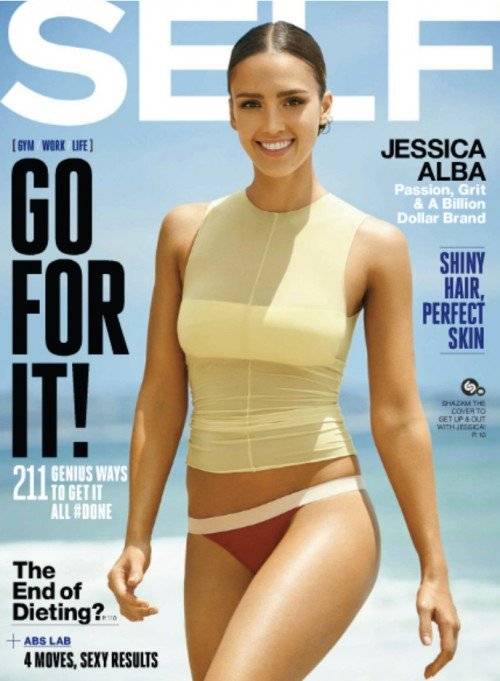 One of North America’s most popular women’s magazines has featured Mountain Trek in an article called “Sporty Spas Everyone Should Visit at Least Once in Their Lives.” Writer Tatiana Boncompagni showcased various retreats around the world but Mountain Trek was the only Canadian resort to make the list thanks to our all-inclusive program that targets fitness, nutrition, detox, sleep health and stress reduction.

In the article Tatiana writes, “Days start at 5:45 a.m. at this intense, week-long alpine retreat set in the beautiful Canadian Rockies. After breakfast and yoga, you’ll hike 5 to 13 miles, depending on your fitness level, before heading back to a 15-room timber-frame lodge for a light lunch and afternoon fitness class. Nightly lectures focus on stress reduction, sleep and nutrition; dinners feature locally sourced fish and veggies.”

Mountain Trek boasts good company in the piece as Hilton Head Health, Rancho La Puerta and BodyHoliday in St. Lucia were also featured but unlike the other spas and resorts, Mountain Trek’s program guarantees fat loss while also targeting other aspects of your health so you leave feeling completely transformed on every level . Not only do you shed fat at Mountain Trek,you also feel healthier overall because you:

Self magazine is a health, wellness, beauty, and style magazine for women based out of New York city. It has a readership of approximately 1.5 million.

To see Tatiana’s story in its entirety, log on to the Self magazine’s website and read, “Sporty Spas Everyone Should Visit at Least Once in Their Lives.” 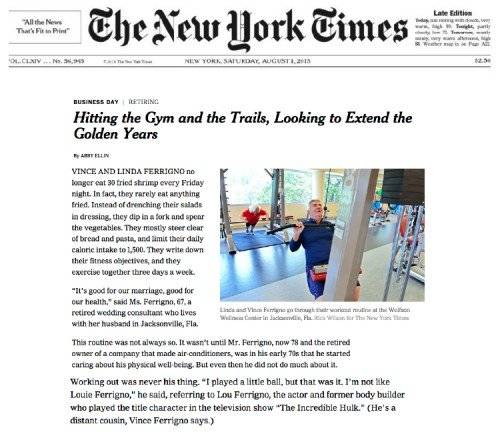 America’s most popular East Coast newspaper has just featured Mountain Trek in an article about wellness and extending youthfulness. In a story that appeared in Saturday’s New York Times, writer Abby Ellin showcased how people over the age of fifty are rediscovering their vitality through exercise clubs and health programs, such as the one offered by Mountain Trek.

In the article Abby writes, “Common wisdom has held that if you have not adopted an exercise or fitness routine in your early years, you probably won’t start in later life. But like so many misconceptions about middle and post-middle age, the idea is slowly fading way. According to the International Health Racquet and Sportsclub Association, people 55 and older are the fastest-growing membership segment for the health club industry. In 1990, 1.9 million health club members were age 33 and above; last year, that figure hit 12 millions, a 532 percent increase.”

The article goes on to discuss how exercise helps people look and feel younger and describes the experiences of various people who decided to embrace wellness later in life.

Then readers are treated to an interview with an amazing alumni of Mountain Trek named John Striker. He says he didn’t want to lose the “joy” in his life, which is why he has visited our lodge in British Columbia for the past nine years. Abby writes, “He hikes from five to 12 miles a day enjoying beautiful scenery, and eats no sugar or processed foods. He believes his money is well spent.” John is then quoted as saying, “As I get older, I need to be reminded of the potential of my body, what it’s capaable of doing if I really take care of it. My body may not be what it was at 25 but it can still respond.”

To read Abby’s story in its entirety, log on to the New York Times website and view, “Hitting the Gym and the Trails, Looking to Extend the Golden Years.”

And to embrace your own wellness, we invite you to book your stay with us at Mountain Trek today. 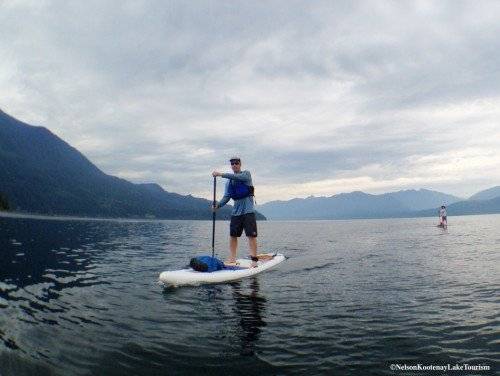 Mountain Trek is renowned for helping urbanites and business professionals reboot their vitality and get back on track in terms of their health and wellness. What people may not know, though, is we’re also a vacation destination for athletes – people who exercise regularly but who need to take their fitness or wellness to a new level or who need to train for an upcoming event.

In her recent article entitled “Vitality Found”, Dianna Ducs, the Executive Director of Nelson Kootenay Lake Tourism, writes about how her stay at Mountain Trek helped her prepare for an epic, seven-day Stand Up Paddleboard adventure. Dianna, who’s a fit bicyclist, writes in her story: “I can say without a doubt that I was successful in achieving my goals. Even better, all the guests who were with me at Mountain Trek achieved their goals as well! After only one week I now stand and sit much taller and stronger. I gained four pounds of muscle, lost 3 pounds of body fat, and I addressed some dietary needs to improve my metabolism and energy levels.”

To read more about Dianna’s experience at Mountain Trek, log onto her story ““Vitality Found” on the Nelson Kootenay Lake Association website. 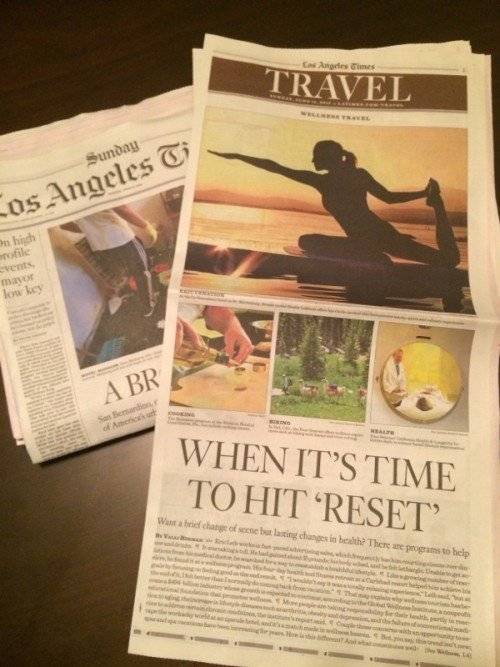 In the article Mountain Trek’s program director Kirkland Shave is quoted as saying, “We help people reboot their metabolism…[We] give them every tool to … adjust into a world of sugar, stress, sleeplessness and solitariness.”

To read Herman’s story in its entirety, log on to the LA Times website to view, “Going on Vacation and Returning Healthier? It’s the Wellness Program Plan.” 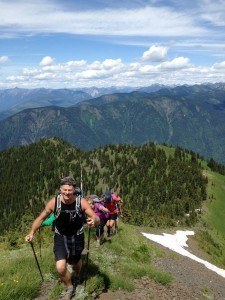 Mountain Trek  was featured on the front cover of the Travel section of The Globe and Mail, Canada’s largest national newspaper, this month:

“7 hours a day of  exercise…Welcome to your vacation.”

The Globe feature was written by Amy Rosen who found “bliss in a boot camp getaway.” She chronicled her experience in a diary-format and spoke of each day and what she ate, experienced, and witnessed from “halibut fish steaks with pineapple mango salsa” to “vibrant green old-growth forests.” This is an excerpt:

“Mountain Trek’s spa and fitness studio have floor-to-ceiling windows overlooking the 100-kilometre Kootenay Lake. There are gardens and wildflowers, mountains and blue skies. Meals are local, organic, plated – and mostly delicious, enjoyed by guests around family-style tables. So that’s the good news. Back at my weigh-in, the excuses fly: “I’ve been travelling a lot, no time for exercise. It’s summertime … and those gin and tonics aren’t going to drink themselves!” Until, finally, acceptance: I’ve gained a few on the rump. Let’s. Do. This.”

Click here to read Amy’s entire article, and to experience a similar personal transformation to what she did, contact Mountain Trek and we’ll let you know about what program would best suit your needs. 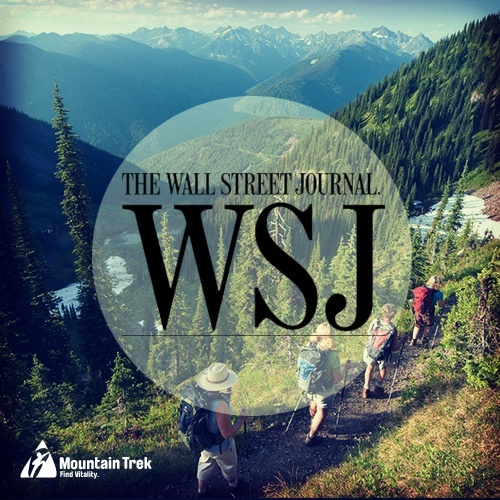 Mountain Trek  was featured in the Adventure & Travel section of The Wall Street Journal.

“Embark on a Milder ‘Wild’… Find Calm in Canada.”

The WSJ feature was inspired by Cheryl Strayed’s book ‘Wild‘,  memoirs of her 1000 mile hike on the Pacific Crest Trail. On the tails of her divorce and her mother’s death, she was inspired to take on this trek. Readers empathize with Cheryl’s grief, loss, and quest for sense of self through such a challenge. And while one certainly has the choice of embarking on such an epic journey, one can also choose to find sense of self through hiking, while also relaxing in the lap of luxury. Challenging yourself, while also taking the time out you so deserve.

“Fans of ‘Wild‘ who’d like a quest with some comforts can opt for escapes that come with spa treatments and gourmet picnics.” Alongside other pampering hiking adventures such as Austin Adventures in Utah, Savory Trails of Tuscany in Italy, and Mountain Travels Sobel in Japan our very own Mountain Trek is featured as just one such retreat where you can simultaneously find calm while finding vitality, a “nature infusion, a fitness jump start, or both”. 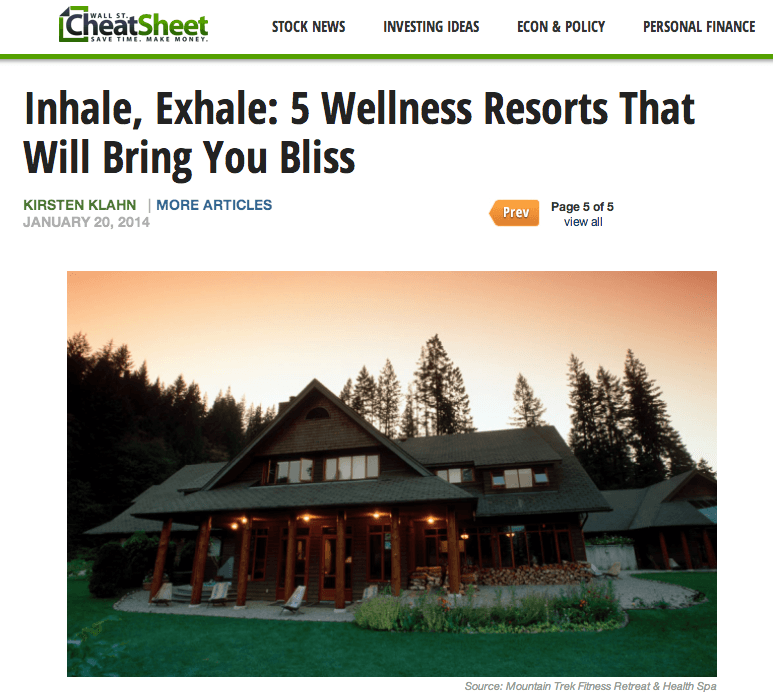 Mountain Trek was named one of five Wellness Resorts that will Bring you Bliss by Kirsten Klahn on the Wall St. Cheat Sheet.

Picture yourself waking up at this resort in Ainsworth Hot Springs, British Columbia, and participating in an early morning yoga class, hiking, a detox and nutrition seminar, an evening workout class, and a relaxing spa treatment before bed. 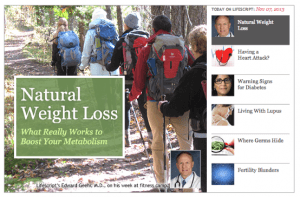 Mountain Trek was recently featured on Lifescript.com – an online health and wellness publication dedicated to providing women education and information on healthy living.

“It was fascinating… The program demanded a lot of effort and commitment, but my before-and-after body analysis demonstrates the results… I lost 4% of total body fat (the key measurement at Mountain Trek), 3 inches off my waist and reduced my resting blood pressure and heart rate.”