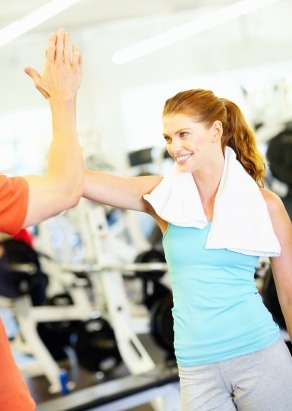 10 minutes, that’s all we’re asking, okay, if you’ve been to MT, you know the magic number is 40 minutes of exercise 3-5 times a week (in your target heart rate zone, breathing hard but not breathless). A study in a new research field called “metabolomics” is showing evidence that 10 minutes of exercise increases metabolic changes up to one hour. Bonus if your already fit, you may get more benefits.

The following is a quote from the AP article from which the study is cited:

First, in 70 healthy people put on a treadmill, the team found more than 20 metabolites that change during exercise, naturally produced compounds involved in burning calories and fat and improving blood-sugar control. Some weren’t known until now to be involved with exercise. Some revved up during exercise, like those involved in processing fat. Others involved with cellular stress decreased with exercise.

Those are pretty wonky findings, a first step in a complex field. But they back today’s health advice that even brief bouts of activity are good.

“Ten minutes of exercise has at least an hour of effects on your body,” says Gerszten (a researcher), who found “some of the metabolic changes that began after 10 minutes on the treadmill were still measurable 60 minutes after people cooled down.”

So when you have only 10 minutes to spare for a quick walk around the block, take it! 10 minutes goes a long way to contributing to your overall health.

You can read the entire article here.

10 Tricks to Stick To Your New Year's Resolutions

How Long can Rapid Weight Loss be Sustained?

8 Ways to Make the Most of your Fitness Vacation

Back pain? Read This Before Getting A Back Brace