We’re not saying not to indulge, but we are recommending that you get to know your vices a bit better in order to make good decisions about when you do decide to have a drink. How alcohol affects weight gain or weight loss depends on genetics, diet, gender, potential ‘sensitivity’ to it and your habits.  No single food item affects humans in so many varying and differing ways.

All alcoholic beverages contain calories, most of which come from the alcohol, regardless of whether the beverage is wine, spirits or beer. Your body processes alcohol first, before fat, protein, or carbs. Alcohol is not a carbohydrate but it does contribute to weight gain by slowing down the burning of fat. When you drink alcohol, it’s broken down into acetate (basically vinegar), which the body will burn before any other calorie you’ve consumed or stored, including fat or even sugar.  Drinking alcohol raises acetate levels 2.5 times, and this sharp rise is what appears to stop fat metabolism.

Fat metabolism is called lipid oxidation and alcohol temporarily inhibits lipid oxidation making it harder for your body to burn fat that’s already there. Consuming higher fat foods like cheese or other high-calorie snacks while drinking, exacerbates the storage of fat. They become the last thing to be metabolized by the liver after the acetate and carbohydrates. 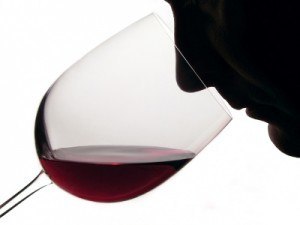 Hard liquor is distilled and thus contains no carbohydrates. The current “Zero Carb” campaign for vodka and whiskey is a gimmick.

When grapes are made into wine, most of the fruit sugars (carbs) convert to alcohol.  A 5-ounce glass of wine supplies roughly the same amount of alcohol and number of calories as a 12-ounce light beer or 1.5 ounces of 80-proof spirits.

Beer, wine, and liquor have calories because alcohol has calories—not because of carbs. The alcohol is used to produce acetate for energy and thus interferes with burning fat.  This changes in intensity for many reasons, including genetics, age, and what foods are being eaten with the alcohol.  Because the beverage affects body weight from deeper metabolic processes, the low-carb beers and wine or carb-free spirits are simply marketing gimmicks.