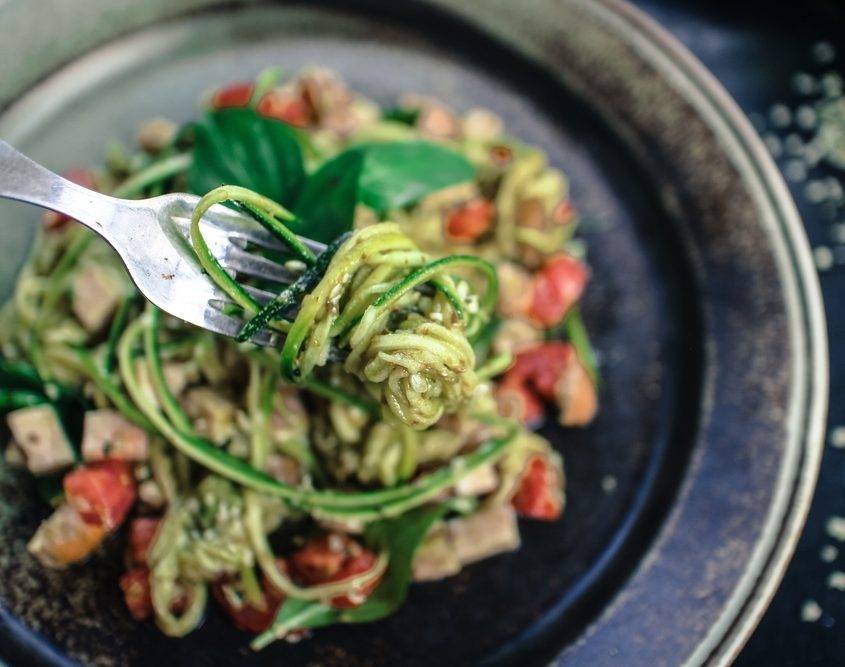 Let’s be real, a large reason you’re coming and/or have come to Mountain Trek is for the food, more appropriately referenced as ridiculously-delicious, organic spa cuisine, that just so happens to be calorie-controlled to reset your metabolism. But who’s the mastermind behind our nourishing meals and snacks? Who is this menu-Einstein we all want to take home with us?

This year, we’re excited to introduce Simon Vine, Mountain Trek’s very much invaluable Head Chef. Through a rigorous vetting process, we hired Simon to take the reins of Mountain Trek’s meal-creation not just because he’s a wizard in the kitchen, but because he has journeyed through life in a way that closely aligns with our program’s ethos. 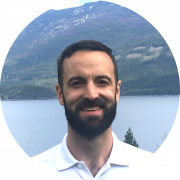 In 2016, Simon Vine had worked his way up from being Executive Chef at a renowned fishing resort to catering for up to 300 people in the film industry. He was on top of the world. Behind the scenes, however, the 80-hour weeks were causing him to physically and mentally deteriorate. Depleted, Simon moved from Vancouver, Canada, to a remote island. There, he spent six weeks letting go of a stressful, hustle-bustle routine devoid of sleep and healthful food. He recommitted to himself, promising to return to his roots. He yearned for the plant-based, outdoor-oriented lifestyle of his childhood.

Simon and his wife never returned to the rat race; instead, they moved to the Kootenay Mountains. At Mountain Trek, Chef Simon is able to balance work with camping, biking, hiking and skiing, and he has rekindled his appreciation of a wide range of ethnic cuisines and ingredients.

Simon’s meticulously-crafted spa cuisine is both balanced and bold, light and intensely flavorful, and it’s created with the intention of helping others positively change their lives. While he’ll be bringing back many guest favorites this season, he’s also excited to be rolling out a few new dishes; he is, after all, dedicated to elevating our meals, while ensuring they stay within the program’s framework.

He says, “I’ve been busy counting calories and ensuring that we are able to deliver the results people want, without compromising on flavor and quality. We’ve also brought in some new cooking techniques with the addition of a “sous-vide” circulator to our kitchen.”

Regarding what’s new on the menu, Simon says, “One new dish I’m really excited about is the seared steelhead salmon with parsnip puree, grilled fennel and radicchio salad, and tomato-caper relish. The steelhead we feature is an amazing local British Columbia fish, which is produced sustainably. The beautiful mild flavor of the fish is complemented by the rich sweetness of parsnips, as well as the fresh and bright flavors of the fennel and radicchio salad.” Rounded out with the sweet and tangy bite of the tomato caper-relish, Simon says, “This dish is a winner in my books!”

To whet your whistle just a little more, Simon says, “I’m also really excited about the rutabaga spaghetti with tempeh-almond ‘meatballs’ and a tomato-cashew rosee sauce, which will be accompanied with a kale caesar salad.” He says, “It’s a really healthy and interesting twist on the ultimate comfort food: spaghetti and meatballs.”

Eating isn’t just about curbing hunger pangs–it’s about nourishing a healthy and active body. The Mountain Trek program doesn’t offer a “diet”; instead, we eat seasonal, local, wild and organic foods six times over the course of the day to properly absorb all nutrients and avoid energy crashes. Each meal and snack is individually prepared for your body and your goals for the week, and are free of processed foods, stimulants or toxins, allowing your body to heal and strengthen.  If you feel in need of a health reset, join us for a week of exercising in nature, de-stressing in the spa, and clean eating.

The Kootenay Bowl With Herbed Tofu 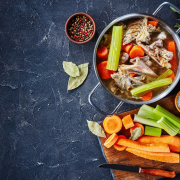 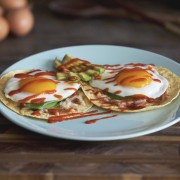 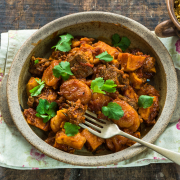 Creative Ways to Mother Yourself
Scroll to top